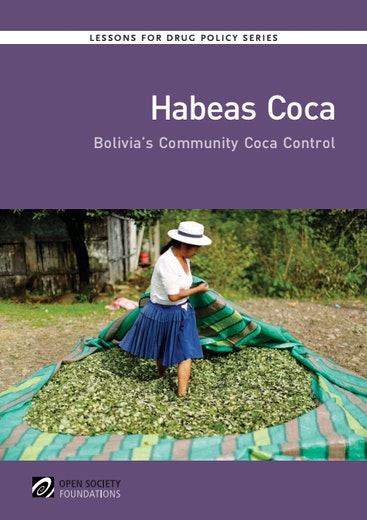 With significant pressure and earmarked funding from the United States and other demand-side countries, the Andean countries of Bolivia, Colombia, and Peru have struggled for decades with the question of how to limit the growth of coca and the export of cocaine and comply with UN drug conventions. Tactics such as forced eradication, criminalization, and marginalization of coca farmers have not only failed to significantly reduce cocaine production, but have had disastrous consequences for the economies and communities in the region.

In 2004 the Bolivian government, despite international pressure to maintain the status quo, gathered the political momentum to try something different. Bolivia established the cato accord that allowed farmers to legally grow a limited and regulated quantity of coca leaves, a mainstay of Andean life for 4,000 years.

The Bolivian model’s simple concept is supported at the local, national, regional, and international levels by a complex network of growers, unions, organizations, government agencies, and police and military forces.

Habeas Coca: Bolivia’s Community Coca Control explains how the community control system works and shows its effectiveness in decreasing violence, increasing citizen engagement, limiting corruption, stabilizing and diversifying local economies, and reducing coca cultivation. It also explores the areas where the program and its evaluation can be improved.

Countries where legal and illegal drug markets coexist, or can be developed, can benefit greatly by exploring and adapting the community control model to their unique circumstances. And, by better understanding the possibilities and constraints placed on those on the supply-side, countries on the demand-side of the global drug market will learn from Habeas Coca how critical their own policies, domestic and foreign, are to the success of limiting cocaine supply.