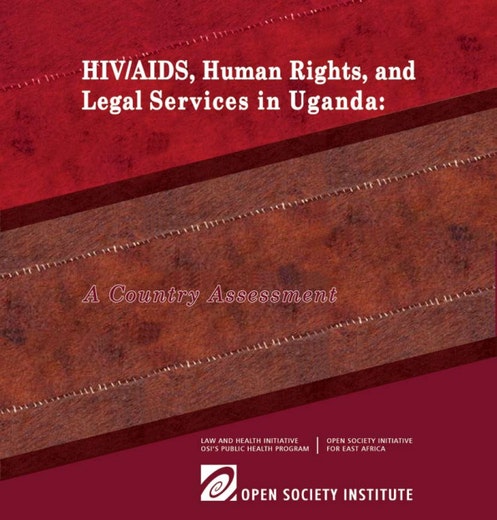 Widespread human rights abuses and lack of legal services is fueling Uganda's HIV epidemic, according to a report from the Open Society Initiative for East Africa (OSIEA) and OSI's Law and Health Initiative (LAHI).

HIV/AIDS, Human Rights, and Legal Services in Uganda documents common abuses faced by people living with AIDS or at high risk of HIV, including: barriers to employment or education; discrimination in gaining access to medical care; violations of the right to medical privacy; forced HIV testing; and eviction from housing.

According to the report, while the government of Uganda has addressed the medical effects of the HIV epidemic, it has paid little attention to the epidemic’s legal and human rights implications. This is especially true for marginalized populations who are most vulnerable to HIV-related human rights abuses: women (especially young women, widows, and women living in fishing communities); sex workers; orphans and vulnerable children; lesbian, gay, bisexual, and transgender (LGBT) individuals; and internally displaced persons.

The report recommends stronger enforcement of policies and legislation that offer clear protection against HIV-related stigma and discrimination. It calls for greater support to community-based groups that have sought to integrate legal support into HIV prevention and care programs. It also recommends strengthening legal mechanisms to help people living with HIV access justice. Local Council Courts appear to be the most utilized dispute resolution mechanism by communities, but these courts are not being used to address HIV-related infringement of rights.

The recipient of the International AIDS Society’s inaugural Prudence Mabele Prize, Duduzile Dlamini, is a reminder to the world that the rights of women and girls cannot be treated as an obstacle to public health.

The practice of incarcerating tuberculosis patients was rebuked by the country’s High Court, putting an end to a dangerous and inhumane practice.

The UN’s global drug policy debate is a crucial chance to ensure the need for palliative care demand is met in Kenya and beyond.