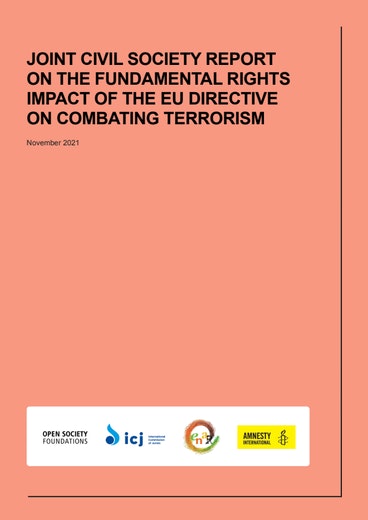 The September 11, 2001 attacks marked a fundamental shift in the global counter-terrorism architecture. Subsequent attacks, loss of life, and trauma rightly compelled law and policymakers to take action. But in many countries, instead of being guided by human rights principles, this led to extreme securitization and precipitated measures that stigmatized communities and undermined the rule of law.

Joint Civil Society Report on the Fundamental Rights Impact of the EU Directive on Combating Terrorism focuses on the 2017 Directive which was adopted by the European Union in response to the series of violent attacks in Paris at the end of 2015. Legislators rushed the process and failed to address significant concerns and flaws in the text that have now proven to result in a range of human rights violations, with many living with the negative consequences of vague and overly broad legislation, in addition to increased securitization.

The report was commissioned by the Open Society Foundations, Amnesty International, the European Network Against Racism (ENAR), and the International Commission of Jurists (ICJ), building on joint advocacy with these organizations as well as with the European Digital Rights Initiative (Edri) and Human Rights Watch. It provides an overview of the fundamental rights challenges that emerged during the drafting and implementation of the Directive and makes recommendations for reform at the state and institutional levels.

The text of the draft Directive on Combating Terrorism gives rise to serious human rights and rule of law concerns.

Submission to the European Commission on Proposed Antiterrorism Directive