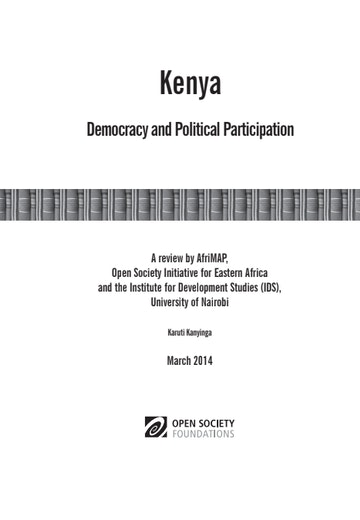 The active and meaningful participation of citizens in public affairs is the distinguishing feature of democratic societies, which are judged by the extent to which governments open up to citizen involvement in public affairs and the space they give for citizens to hold the government accountable. It is because of this that citizens in Kenya and Africa in general continue to demand increased space for participation.

The report identifies impediments to Kenya’s democratic consolidation, with the most important challenges identified as ethnicity and identity politics, the electoral system of first-past-the-post, and the dominance of the executive. The report notes that ethnicity is a symptom of the structure and use of political power. Specifically, the interplay of ethnicity and the competition for executive power have constrained public participation and the democratic transition in general.

Increasingly, people willing to stand up for environmental and social justice in South Africa are being met with violence. A new Open Society fund will support these brave and vulnerable advocates for change.

For a Better Future, Sudan Must Confront Its Past

With Omar al-Bashir no longer in power, the temptation to move beyond his regime’s crimes is understandable. But unless Sudan grapples with its past, it risks trading one corrupt dictatorship for another.

The 2019 general election in Nigeria was marred by intimidation, dysfunction, and credible allegations of fraud. Here is why pro-democracy and civil society groups around the world should take notice.