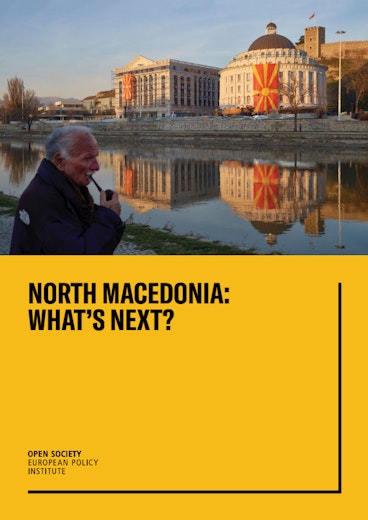 In January 2019, Macedonia’s parliament approved, by a two-thirds majority, a constitutional amendment to change the country’s name to the Republic of North Macedonia. While this represented a major step toward North Macedonia’s ultimate goal of establishing a durable, stable democracy, the name change must still be endorsed by Greece’s parliament before it can go into full effect. But as a new report from the Open Society European Policy Institute shows, a newly-named North Macedonia would still face significant challenges—and opportunities.

North Macedonia: What’s Next? examines the 2018 Prespa Agreement between neighboring Greece and North Macedonia, which laid out agreed upon conditions for resolving the longstanding dispute over Macedonia’s name, and what it means for the larger project of integrating the countries in the Western Balkans more fully into the political and economic systems of Europe, the British Isles, and the United States. The report further explores how key players—such as the European Union, NATO, Russia, other Western Balkans states—approach the Prespa Agreement, explains the significance of the name change in larger geopolitical terms, and offers insight into possible scenarios for the final resolution of this fraught and lengthy conflict.

When a key funder pulled back, many advocates for people in Macedonia with HIV feared the worst. But thanks to a mix of grassroots advocacy and targeted political outreach, the fight against the epidemic continues.

Imagining a New Republic in Macedonia

When the appeals of activists run into resistance, we need to rethink ways of shaping others' attitudes. A park in Skopje became a testing ground to market a new vision of the future.