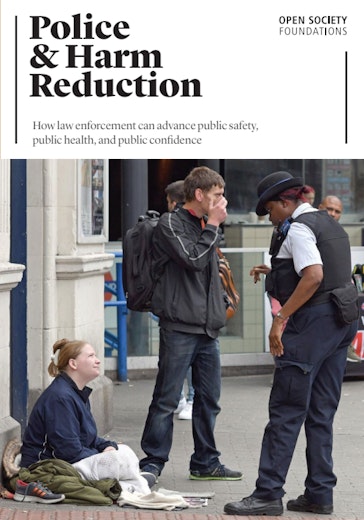 In many cities around the world, communities face significant health and safety challenges associated with drug use. These may include the spread of disease, issues related to homelessness, rising rates of overdose deaths, and drug-related crime.

In response, law enforcement personnel often find themselves tasked with handling these challenges. Many of these issues, however, are not best addressed by punitive measures like criminal investigation or arrest. This is in large part due to the assumption—despite evidence to the contrary—that policing, arrest, and incarceration will prevent people from using drugs. And as a result, law enforcement officers and communities grow frustrated with the ineffective so-called “revolving door phenomenon,” where people are arrested, detained, and released—only to be arrested again.

Based on the direct experiences of law enforcement officers from across the globe, this report showcases alternatives to common punitive models for policing, and presents recommendations for how to incorporate new, evidence-based harm reduction approaches that aim to increase public safety, public health, and public confidence.

The Consequences of Rising Female Incarceration Rates in Latin America

Punitive drug laws are the driving force behind women’s imprisonment, but two organizations are working together to reverse the trend.