Rights Not Rescue: A Report on Female, Trans, and Male Sex Workers' Human Rights in Botswana, Namibia, and South Africa 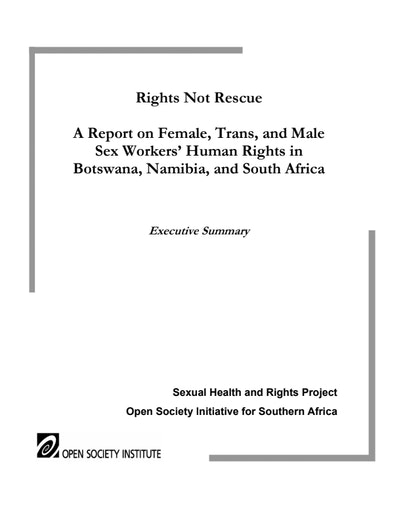 Sex workers in Southern Africa are subjected to widespread human rights abuses, according to Rights Not Rescue: A Report on Female, Trans, and Male Sex Workers' Human Rights in Botswana, Namibia, and South Africa. Released by the Open Society Institute, the report documents the experiences of sex workers and their efforts to protect their rights despite overwhelming challenges.

Rights Not Rescue finds that the criminalization of sex work in each of these countries leaves sex workers particularly vulnerable to sexual and physical abuse from law enforcement officials. In all three countries, sex workers say they experience routine violence from police, including rape, physical assault, and having their genitals sprayed with pepper-spray. In Botswana and South Africa, migrant sex workers from Zimbabwe are often subjected to more severe violence from police and border guards.