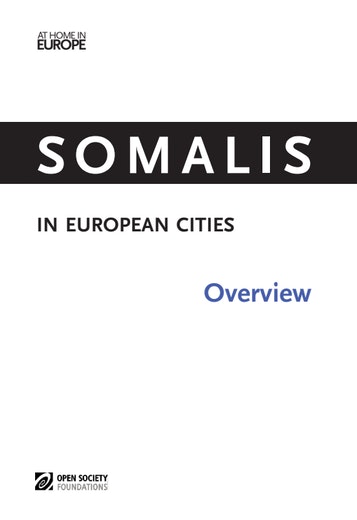 Somalis in European Cities presents an overview of a comparative research series developed by local experts in Amsterdam, Copenhagen, Helsinki, Leicester, London, Malmö, and Oslo. The research aims to capture the everyday, lived experiences of Somalis as well as the type and degree of engagement policy makers have initiated with their Somali and minority constituents.

Somalis in European Cities builds upon and develops the work of an earlier Open Society research series, Muslims in Europe, a comparative analysis of 11 EU cities. The research sprung from the realization that, compared with older minority communities in Europe, Somalis comprise a new, rapidly growing community that is little understood by policy makers.

When the Somalis in European Cities research started, these communities were at risk of social exclusion and there was a need for solid research evidence to support the development of effective inclusion and integration policies. Integration policies and measures in European countries have largely been created based on labor migration. But for these groups, which are largely refugee communities whose entry point into European societies is different than that of labor migrants, such policies do not necessarily take into account their unique challenges and nuances.

The overview presents a snapshot of the main conclusions and recommendations of each report, particularly on six areas of local policy—employment, education, housing, health and social protection, political participation, and policing and security—as well as broader themes of belonging and identity and the role of the media.

Somalis in European Cities portrays European Somali communities as dynamic, diverse, and highly motivated. Arriving mainly as refugees, Somalis across different cities encounter similar struggles, such as language barriers, disruptions connected with leaving a country in turmoil, and prejudice and discrimination. The research suggests that there is nevertheless a strong commitment to integration. The good practices highlighted in the city reports point to the potential for making this process more successful for everyone.

The findings from the Somalis in European Cities and the Muslims in Europe series led to a third comparative series titled Europe’s White Working Class Communities. This groundbreaking research demonstrates that marginalization—be it economic, political, social, or cultural—is not a phenomenon reserved for minority communities but can also apply to segments of the majority.