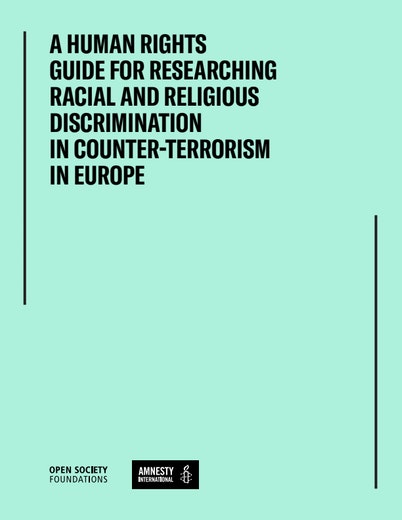 Discrimination against Muslims in the counterterrorism context in Europe is a longstanding human rights concern. In the last two decades in particular, Muslims’ lawful religious, cultural, and political activities and affiliations have been construed as “dangerous” enough to justify significant restrictions on individual rights.

Unfortunately, despite widespread acknowledgement of this issue from the UN and other European institutions, discrimination against Muslims has generally received less attention from human rights groups and oversight bodies.

A Human Rights Guide for Researching Racial and Religious Discrimination in Counterterrorism in Europe, the result of a two-year collaboration between Amnesty International and the Open Society Initiative for Europe, is intended to help right a longstanding wrong by providing activists and practitioners with tools to fight against discrimination; and by proposing a way to redress the violations of survivors' human rights.

While it remains contested as to what the term exactly means, Islamophobia in Europe manifests itself through individual attitudes and behaviors, and the policies and practices of organizations and institutions.

The Truth About Terror and Youth Radicalization

As concerns grow about the influence of social media and the internet in radicalizing young people, it’s vital to separate the myths from the facts.