Are Agri-Food Workers Only Exploited in Southern Europe? 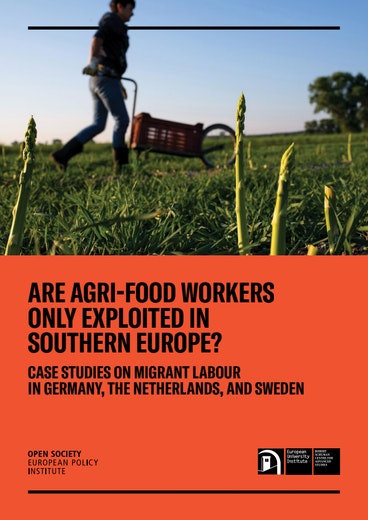 In recent years, several studies have reported on the exploitation endured by migrant workers in Southern European Union member states—especially in sectors such as agriculture and food production. However, there has been much less focus on the North. New research now shows that agri-food workers in Northern Europe also face poor and even abusive conditions.

In this light, Are Agri-Food Workers Only Exploited in Southern Europe? focuses on production in Germany, Netherlands, and Sweden. These three EU member states have stronger social protections than Italy, Spain or Greece—yet the dynamics driving wage compression and the violation of workers’ rights are like those in Southern Europe.

This publication provides recommendations on how the EU and national governments can act to make Europe’s agri-food system more sustainable, benefiting farmers, consumers, workers, and the environment.

Is Italian Agriculture “Pull Factor” for Irregular Migration—And, If So, Why?

This study examines how the EU’s agricultural practices leave workers vulnerable to exploitation, ultimately hurting local communities and consumers, too. The report also offers suggestions for addressing this breakdown.

Technology has enormous potential to improve the situation of the most disadvantaged workers, particularly migrants and refugees in low-wage jobs. But it can also exacerbate power imbalances that lead to worker exploitation.

For Exploited Migrant Workers, a Good Lawyer Can Make All the Difference

Working in foreign countries with unfamiliar laws and languages, migrant workers often find themselves unable to access justice. A free legal service is changing that.