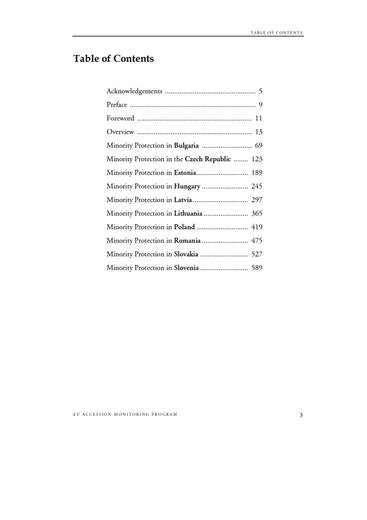 The report notes that although the accession process has prompted the adoption of official policies that seek to safeguard minority rights, implementation of the policies has been slow or nonexistent—at least partly because the measures do not enjoy significant public and political support in most candidate countries. The minorities that continue to face the most severe problems in the 10 states are Roma and Russian speakers.

Certain minorities fare as poorly in five of the largest current EU member countries as well, according to the report. It states that Roma and Muslims, in particular, are disproportionately disadvantaged and remain excluded from mainstream society in France, Germany, Italy, Spain, and the United Kingdom.

The report concludes by urging both candidate and member states to more forcefully develop and implement minority protection policies and to make greater efforts to end lingering discrimination.

The full report is available in PDF format.

EUMAP is a program of the Open Society Institute that is monitoring human rights and the rule of law in 10 Central and Eastern European countries that are expected to join the European Union in the next few years, as well as in the five largest EU countries (France, Germany, Italy, Spain, and the United Kingdom). EUMAP works jointly with local nongovernmental organizations (NGOs) and civil society organizations to encourage a direct dialogue between governmental and nongovernmental actors on issues related to the political criteria for EU accession.

As the EU works on rules to protect worker rights and the planet from corporate harm, Open Society’s Jon Jacoby spoke to Anita Dorett, of the Investor Alliance for Human Rights, about how investors are pushing for change.