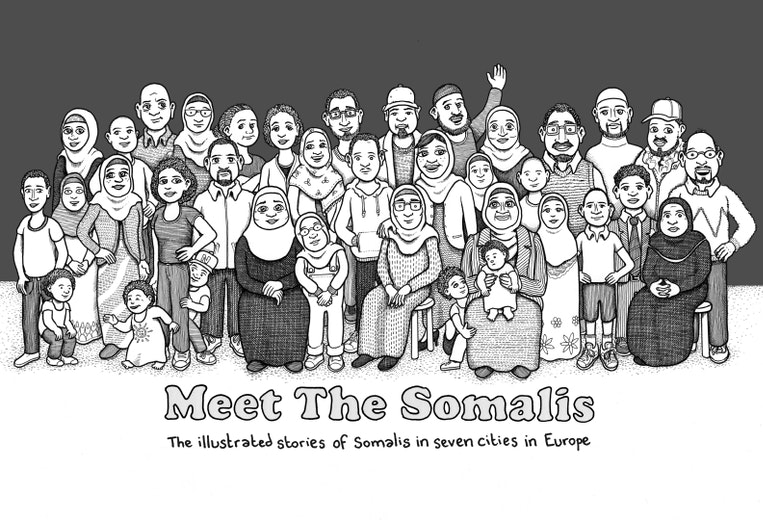 The Somali community in Europe is a vibrant, diverse minority group, including people of Somali origin born in Europe, Somali refugees and asylum seekers, and Somalis who have migrated from one country in Europe to another. There are no accurate figures for the number of Somalis in Europe, but on the whole they are among one of the largest minority groups.

The illustrated stories focus on challenges faced by Somalis in their respective cities in Europe and issues raised in the Somalis in European Cities research, including education, housing, the media, employment, political participation, and identity.

Meet the Somalis depicts experiences many of us will never know, like fleeing a warzone with your children or, worse, leaving your loved ones behind. But more often, these stories portray the values shared among many of us, like the importance of family, well-being, and identity in an ever-changing world.

The stories in Meet The Somalis were told to author Benjamin Dix and drawn by artist Lindsay Pollock.

Somalis in Europe: Their Stories, in Words and Illustrations

Meet the Somalis, a collection of illustrated stories about the real-life experiences of Somalis in Europe, allows readers to meet one of Europe’s most diverse and growing communities.

Meet some of the people behind the illustrated story collection Meet the Somalis.